When is the CDSI?
CDSI will run from Monday, July 25, 2022 to Friday, August 12, 2022. The one-week Virtual Speech Camp will start first and run from July 25th – July 29th. Then the two-week Virtual and In-Person Debate Camps will follow and run from August 1st – August 12th.

Who is CDSI for?
CDSI is open and available to students ranging from 5th grade through 12th grade. Students from any state in the US can join virtually and students living in the Chicago-land area are encouraged to attend in-person.

Will food be provided during the in-person debate camp?
Yes! Students will receive lunch daily while at camp, along with snacks as needed. 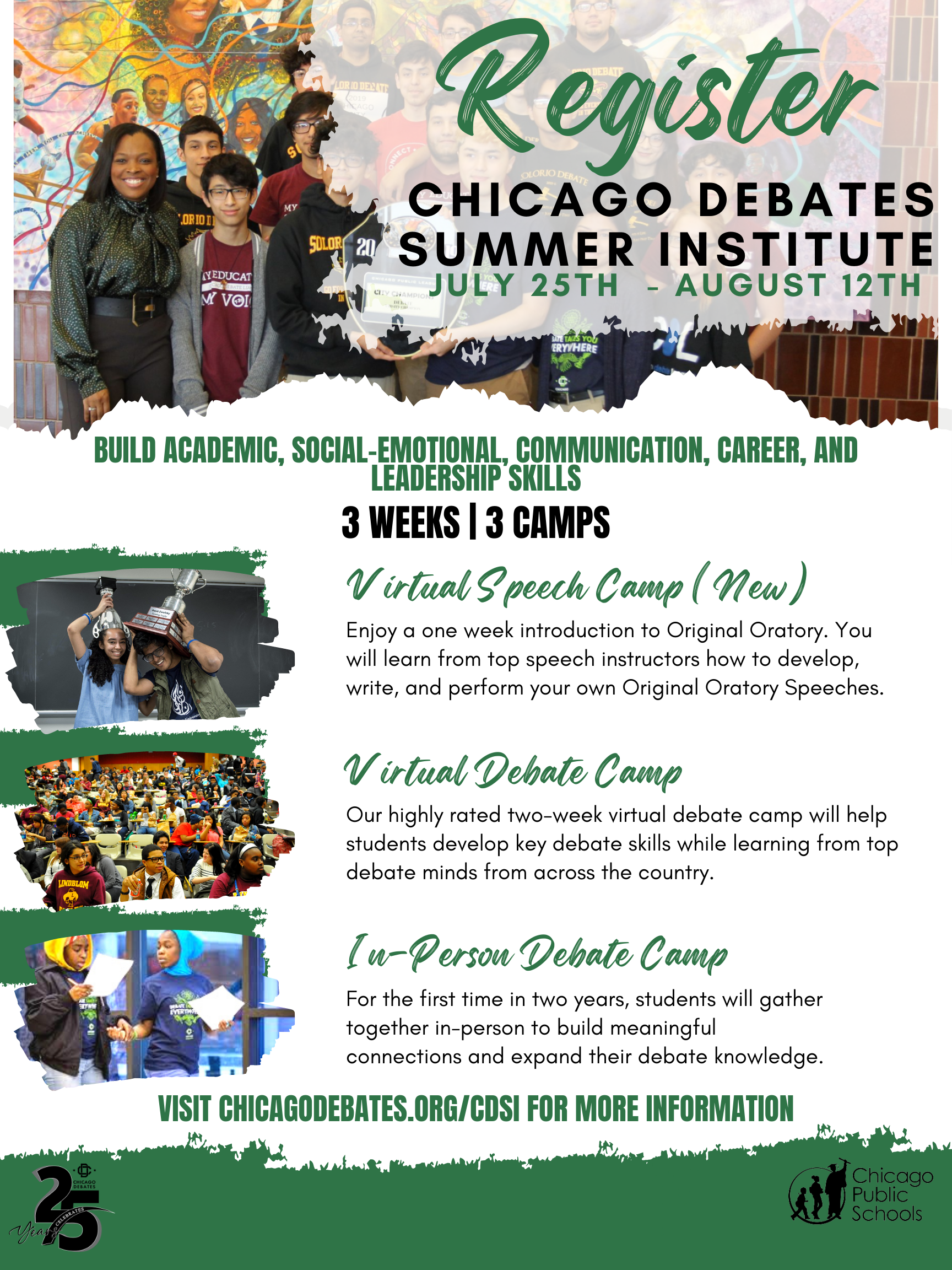 How much will camp cost?
Depending on your financial situation and association with the Chicago Public School district your cost for camp will vary. A $25.00 registration fee will be added to the following camp costs:

* Title 1 registrants will need to verify their status with Chicago Debates staff. Failure to do so will result in being charged the full CPS Student price.

How do I know if I qualify as a Title 1 student?
Regardless of what CPS school you or your student attends, any household meeting the following United States Department of Agriculture income guidelines would qualify.

Chicago Debates will follow-up for verification once registration is closed.

Does my child have to attend both Speech and Debate camps?
No, you are able to select whichever experience best fits your interest.

What should a debater expect to receive from CDSI – Chicago Debates Summer Institute?
During the three week CDSI experience students will engage with top speech and debate instructors from around the country. By the end of camp students will have increased their public speaking, critical thinking, argumentation, research, writing, and persuasion skills. Students who select to participate in the one-week speech camp will leave with a fully formed speech draft for Original Oratory competition in the Fall and Spring. Students who participate in the two-week virtual or in-person debate camp will engage with the 2022 – 2023 Policy Debate topic and get a head start in engaging with the Core Files. The aforementioned skills and experiences will directly impact students academic performance and success in the upcoming school year. Most importantly, participants will build new relationships with students from across the region through active listening and civil discourse.

Last year, we were thrilled to also virtually host our two-week summer debate camps for nearly 100 students. Here’s what some students had to say about their camp experience:

“Reviewing terms was a good way to bounce back into debate especially after summer.” -Samantha

“I really love the energy and humor of my lab leader. I also think that it’s also really great to get back at the fundamentals.” -Jonathan

“What I enjoyed most today was that Disney movies were the topic and we talked about the racism in the world.” -Giselle

“I enjoyed watching the lab instructors do skits on what not to do in debate.” -Joey

Instructor applications coming soon! We look forward to again having the best staff of teachers from Chicago, legendary CDL alums, and national college instructors that we’ve had in past years. Email Lauren if you are interested in teaching.