Hannibal Buress debated for Steinmetz Academic Center where he graduated in 2000. He reached the semifinals of the Chicago Debate Championship in the JV division in 1999/2000. He was recently named the 2010 CDL Alumnus of the Year. 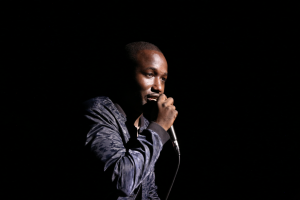 Hannibal Buress is a fast-rising comedian and comedy writer, with a growing national reputation and following. Currently, Hannibal is a writer for “Saturday Night Live” and recently performed on both “Late Night with Jimmy Fallon” and the “Late Late Show with Craig Ferguson.” Last year, he was named by Time Out Chicago in 2009 the “funniest person in Chicago.” Hannibal was also a finalist in the “Laugh Across America” contest, and was one of the Chicago finalists in the NBC “Stand-up for Diversity Showcase.” While he was a student at Southern Illinois University, he hosted his own campus television show “The Hangover” which became a hit among the Saluki dorm dwellers. Several hilarious videos of his performances are available on Youtube.

Time Out wrote about Hannibal, “Buress followed some friends to the debate squad — a great training ground for learning how to frame an argument (constructing a joke) and holding up under cross-examination (taking down hecklers).”

According to Hannibal: “Debate was definitely an enjoyable time for me in high school. I was rewarded for being a smart aleck. It taught me to be quick on my feet. It definitely shaped what I do in comedy and writing right now.”

Peter Bavis, Hannibal’s high school coach had this insight regarding his student’s personality: “As a debater, Hannibal demonstrated a ‘cool grit’ — a combination of coolness under pressure and determination to succeed. I remember him using in cross-examination the same posture and delivery that he now deploys to take on hecklers during his stand up shows. This has obviously paid dividends in the world of stand up comedy where every audience member is a judge and the competition fierce.”