This year, we were delighted to have Wintrust join us as our first-ever Corporate School Sponsor. The initiative was created as a way to expand debate into more schools in under-resourced neighborhoods, giving them a transformational activity that helps students find their voice, prepares them for success in college and career, and empowers them to be leaders in their communities. 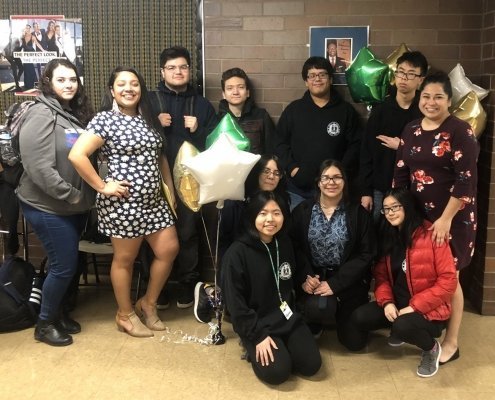 When you look at Wintrust’s history and values, it is easy to understand why they decided to invest in debate. Since opening their doors in 1991, Wintrust’s main goal has been providing Chicago with a true community bank that invests in the neighborhoods they are a part of. After opening up a branch in Brighton Park in 2018, they saw investing in the Thomas Kelly High School debate team as a way to support their new neighborhood.

“Chicago Debates is a great program that encourages young kids to stand up and rely on themselves,” said Wintrust President, CEO & Founder Edward J. Wehmer. “That’s an invaluable skill to learn and why Wintrust wanted to be involved with Chicago Debates and the Kelly High School debate team. Debate is hard. Learning these skills now sets these kids up for success moving forward. As a bank that’s working to help build a stronger Chicago, this is just the type of program we’re proud to get behind.”

It is easy to see the positive impact Wintrust’s support has generated. Thomas Kelly’s success with debate is reflected not only through their tournament results this year – winning the JV Conference Championship and making it to the quarter-finals in the novice division of City Championships – but in their enthusiasm for their school and community. Looking at how many former debaters return to Kelly to coach the team and pass down the knowledge they gleaned from the activity, it is easy to walk away with a feeling of that Kelly Pride.