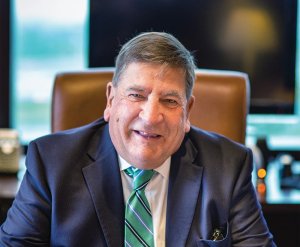 Ed is the Founder and Chief Executive Officer of Wintrust (Nasdaq: WTFC). Founded in 1991, Wintrust is a financial services holding company, based in Rosemont, Illinois, and is currently the second largest bank group headquartered in the state. Through its family of community banks, and a number of related companies and divisions, the Company provides traditional commercial and community banking services, wealth management guidance,  commercial insurance premium financing, mortgage origination, short-term accounts receivable financing and certain administrative services. Wintrust provides customer and community-oriented, personal and commercial banking solutions to those located in and around Chicago, southern Wisconsin and northwest Indiana.

Ed graduated from Georgetown University in 1976 and is a certified public accountant. Ed’s primary career focus has been banking, beginning at the accounting firm Ernst & Young, LLP, where he specialized in banking focused mainly on bank mergers and acquisitions for seven years. After leaving Ernst & Young, Ed was senior vice president and chief financial officer of River Forest Bancorp, a $4 billion bank holding company in Chicago, Illinois from 1985 to 1991. While there, he was also president of the firm’s largest subsidiary, Lincoln National Bank, in Chicago. He left in 1991 to start Lake Forest Bank & Trust Company, the first Wintrust bank.

Ed is a member and lead independent director of Stepan Company (NYSE) in Northfield, IL. He also serves as Chairman of the Board of Northwestern Memorial Foundation at Northwestern Medicine, on the audit committee of Northwestern Memorial Health Care, is a trustee for Lurie Children’s Hospital and Foundation, and Vice Chair on the Board of the Finance Committee of the Archdiocese of Chicago. Ed is also a director of The Catholic Extension Society of America. Ed and his wife, Dorothy, live in Lake Bluff, Illinois.