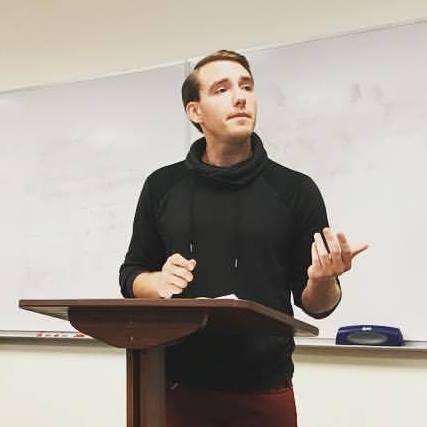 I first joined debate as a sophomore at Thomas Kelly high school. I was recruited by the head coach, Scott Dodsworth, on the recommendation of my history teacher. I liked to argue with other students in class, and clearly needed a constructive outlet so that I might be less disruptive and more focused. I had no idea what I was getting myself into.

I was 15 at the time and captain of the football team. I spent 2+ hours working out every day. I read philosophy books at night, just to soothe my soul, but had no one to discuss ideas with. Neither of my parents have college degrees, or had even made it to the middle class. My goals were rather simple, but respectable. I figured I’d join the military or become a firefighter. I grew up relatively poor, in various neighborhoods on Chicago’s South side (which, despite having lived all over the country, I actively rep to this day).

Debate changed all of that, in dramatic fashion.

It was bizarre, alienating, and convoluted. The first time I saw a varsity round I felt a mix of confusion, frustration, but admiration as well. What were they talking about at such high speeds? How were they so confident in their positions on these complex concepts? How could I attain that level of precision and confidence in my thinking? It was ugly, but it was awesome.

I decided to give debate a chance.

I had done theatre before and had been the lead in a few musicals, so I wasn’t too worried about speaking in front of people. This was different though, and I felt an anxiety filled rush before every round. At my first tournament I went 3-1. I thought I had performed well, given that I had no idea what I was doing, but I didn’t win any awards. A week later I found out that they had miscalculated a few scores and I had in fact won 3rd place speaker in the novice division. This made me proud and hungry for more. I was hooked.

It took over 2 years before the anxiety of debate really faded. I thought about quitting before every tournament, despite winning numerous first place speaker awards and often making it to semi-finals or finals. It wasn’t until the middle of my third year that my nerves finally calmed. I learned to put my ego aside and was able to truly appreciate the beauty and elegance of policy debate. That year I won the city-wide varsity championship. This was something I never would have dreamed of as a 15 year old jock. That was 10 years ago.

Not a day goes by that I don’t actively use the skills I developed in debate.

As a freelance digital designer, debate has empowered me to analyze diverse markets and communication strategies for my clients. I am able to quickly research competition and distill best practices.

As a startup founder, debate has given me the confidence and fortitude to believe that my ideas can change the world. Over 3 years ago I founded HelpWith.co, a peer-to-peer marketplace for local services and learning. I faced many ups and downs; running out of money, losing employees, missing feature deadlines. Thanks to my debate experience, I have been able to overcome these obstacles and now have over 3,000 users on our platform.

As a community builder, debate has helped me understand the nuances of grassroots engagement. How to convey complex ideas in ways that truly resonate and motivate people. To this end, I built StrongerChicago.com, a platform that connects community organizations to people who are looking to make an impact. The consciousness raising I experienced in debate directly led me to building this platform, with the goal of empowering others to take action and have a positive impact on their community.

As a human being, friend, and citizen, debate has helped me empathize, reflect critically, and understand myself as part of a community that is much bigger than me. And to my community I am always indebted.

Now it’s coming full circle. I’m using all of these skills, the very skills I built from my debate background, to give back to the debate community. Recently I founded Debate Academy Online with former city-wide debate champion Nick Locke (my former competitor, now a teacher and debate coach at Lane Tech). Nick and I are now working together to expand debate education with technology so that more students can have the solid fundamentals necessary to compete in debate at a high level. We’re also making the platform free to Chicago Debate League teams, as a way to give back for everything the league has done for us.

I will continue to be a part of the debate community, because I know that I wouldn’t be who I am, have the freedom and fulfilment that I have, if it weren’t for my experience in debate.