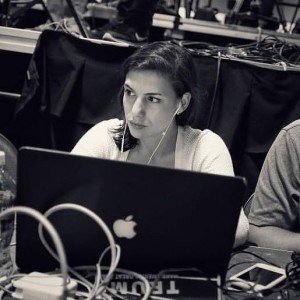 It is the strangest thing to be covering actual Congressional debate over warrantless surveillance under the Foreign Intelligence Surveillance Act about 10 years after you debated it in high school. Some things never change.

But I didn’t do debate in high school because I thought it would help me become a journalist. I had no idea I wanted to be a reporter until I tried writing for my college newspaper, and no inkling I could make it a career when I came to Washington out of college to intern at a Capitol Hill newspaper. Since then, I’ve covered everything from Senate and House campaigns to immigration reform to government shutdowns, first in print reporting and later for broadcast.

Last year I joined the team at NBC News covering the presidential campaign, traveling for so long on campaign planes I gave up my apartment.

I didn’t do debate because I planned any of that — but it definitely prepared me. Debaters are known for becoming lawyers and politicians, and part of the fun of my job is that some days questioning lawmakers feels like an extended cross-ex with an opposing team. Ted Cruz was a championship parliamentary debater, and he’s still fantastic at spreading*.

Poking holes in lawmakers’ arguments, thinking on my feet and dissecting legislation are all things I first learned as a high school debater. Crafting arguments and using precise language are things I do every day now as a correspondent for Vice News Tonight, the new nightly news show on HBO — and skills I honed in debate.

But debate doesn’t just teach you to become a huge nerd. Payton’s debate team — nurtured along by Dick Sullivan — is also where I really learned to work in a team and rely on my peers as equal participants in reaching a common goal. Juggling all those different personalities, relationships and points of view is part of what made debate so constantly challenging and interesting. And it’s not too dissimilar from working with the huge — and sometimes ego-driven! — teams that make broadcast TV.

Fundamentally, though, the practice gave me a sense of how broad and complicated the world is and a belief that, if enough smart people get together in good faith and make good arguments, they can solve big problems. Those are both foundations for my job as a journalist.

And as part of my job today, I still tend to tie everything, eventually, to nuclear war. It’s a bad habit of both debaters and journalists, but it gets you to pay attention, right?

*Spreading is when one debater makes as many arguments as possible attempting to make too many for the opponent to answer.

Interested in staying up to date with Alexandra’s work?