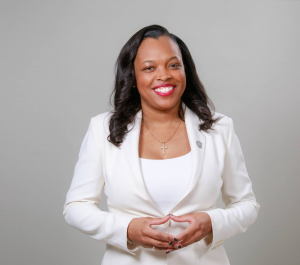 Dr. Janice Jackson is a lifelong resident of Chicago. With over 22 years of experience working in Chicago Public Schools (CPS), she is a nationally-known and respected educator and leader in the field of public education. Her life’s work and commitment to public education and student outcomes began at a young age. After graduating from CPS and receiving her B.A. and M.A. from Chicago State University, she began her teaching career as a social studies teacher and debate team coach at South Shore High School. From there she went on to serve as a high school principal, District Network Chief, and Chief Education Officer all while completing an M.A. and Ed.D. from the University of Illinois at Chicago. In 2017, she was appointed CEO of CPS by Mayor Rahm Emmanuel. She was the first CPS alumna to serve in the position.

Jackson’s tenure at CPS—the nation’s 3rd largest school district with more than 355,000 students, 38,000 employees, and an annual budget of $7 billion—is most notable for the results the district attained in advancing equitable outcomes for its students.

Jackson’s efforts, along with those of Chicago’s dedicated teachers and principals, propelled CPS students to record-breaking improvements in academic achievement, high school graduation, and post-secondary completion.

In September 2021, Jackson became CEO of Hope Chicago, a new two-generation scholarship organization that will eliminate barriers to educational and economic equity by guaranteeing debt-free college and wraparound support services to Hope Scholars and their parents.

Dr. Jackson is married with two children and resides on the southside of Chicago, in the Bronzeville community.