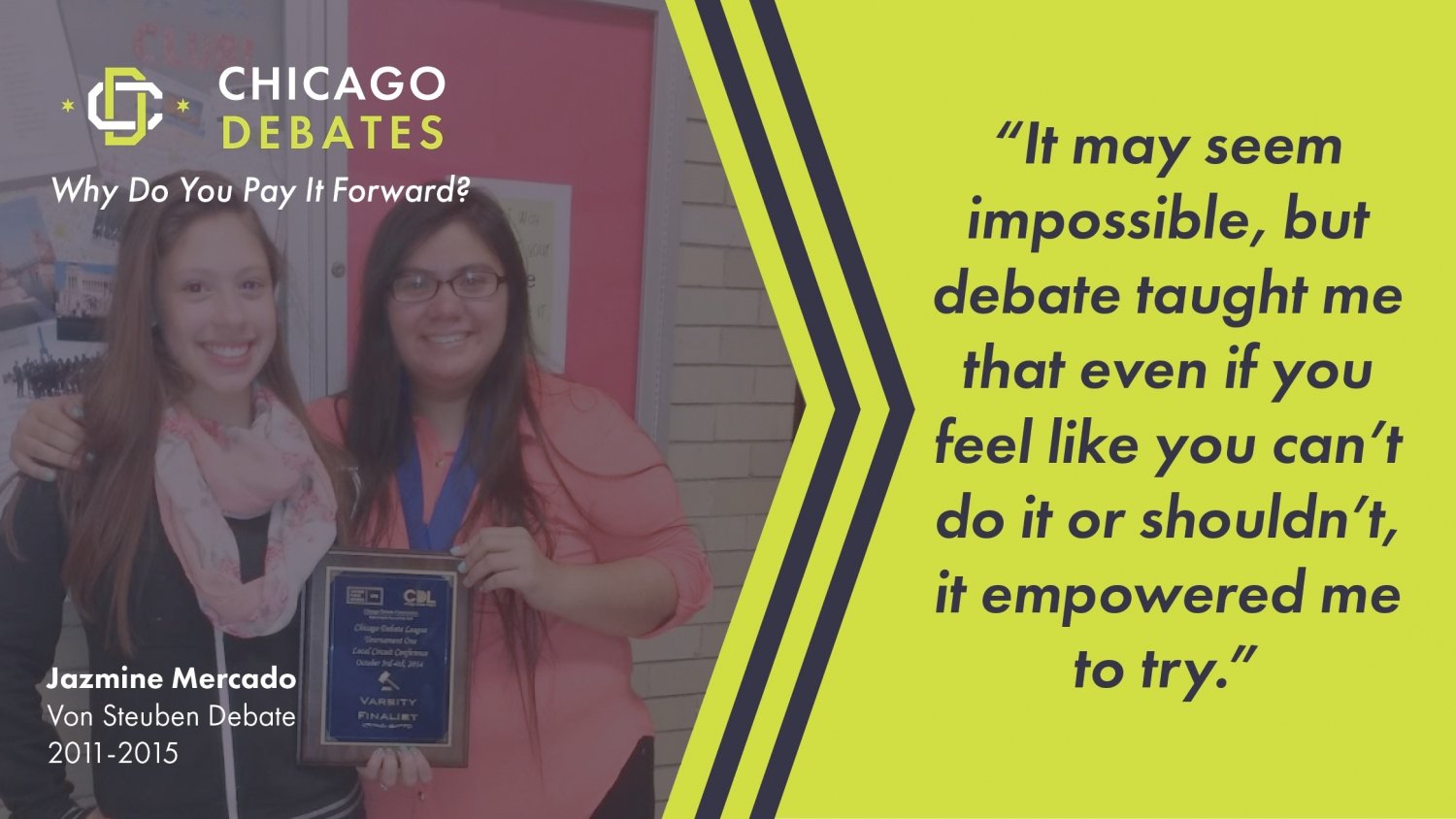 Joining Von Steuben debate as a freshman was a logical step for Jazmine Mercado. Her interest in politics and law made it a natural fit. However, that didn’t make it any easier once she signed up. She still remembers thinking, “I have to wake up at 7am on a Saturday?!”  But she stuck with it, in large part due to the community that was built from the shared experience of the first tournament. “We were all in it together, all confused, and just decided to get through it together.”

As a team completely made up of students of color, it became a space that allowed them to embrace who they were while also expanding how others may have seen them. “Our coaches really empowered us to embrace our circumstances, but not be defined but them. We were motivated to show people we were more than a statistic.” Through debate, Jazmine and her teammates were empowered to seek out information and become experts on topics they were interested in. Beyond the academics, debate was a space that helped Jazmine grow as a person. “The most important thing I remember is how it changed me. Having the debate community made me more confident and really impacted the person I am today.”

Debate gave Jazmine the confidence to be the first in her family to go to college, and exposed her to the University of Michigan where she ultimately attended. Once she got to college, Jazmine struggled to find her place at a mostly white university. As a first generation college student, she had a hard time feeling like she belonged. However, the grit she had gained through debate as she went up against top teams helped prepare her for those hurdles. “It may seem impossible, but debate taught me that even if you feel like you can’t do it or shouldn’t, it empowered me to try.” That perseverance, coupled with her ability to speak up in class and advocate for herself outside of it, is what Jazmine credits with getting her through college.

Now back in Chicago, Jazmine is excited to join the organization that was such a huge part of her life as a Program Officer. It is rewarding for her to share her knowledge and perspective with first time coaches, supporting them as they impact the next generation of debaters. Returning has also given her a different perspective on her own experience. “When I was in high school, I thought I was a lucky one that made it out. But returning I see so many different students that are able to join the debate team from across the city, and I realize now it wasn’t just me. It wasn’t just this one student from this one school on the Northwest Side. It’s happening on the South Side, the West Side, in Little Village, and in Pilsen. Back then I didn’t realize how big the impact really is.”

Join Jazmine and hundreds of other alumni who understand the value of debate with a gift today, and then share why you #PayItForward