You are here: Home1 / Tim Crane 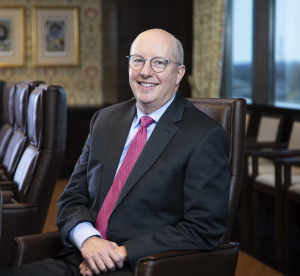 Tim joined Wintrust in 2008, serves on the Executive Management Committees, and is Chairman of the Lake Forest Bank & Trust Company, N.A. and Wintrust Bank, N.A. Board of Directors.

Prior to Wintrust, he was President of Harris Bank/Bank of Montreal in Chicago where he was employed for 24 years. He held positions leading both commercial and retail banking businesses as well as leading acquisition activities.

Tim earned his MBA in Finance from the University of Chicago and an undergraduate degree from University of Illinois at Champaign-Urbana (finance/pre-med). He has completed executive leadership programs at the Ivy School in Toronto, Canada and Northwestern’s Kellogg School of Business.

He has been a speaker at financial conferences and served as a faculty member for several banking schools. He is active in the Chicago area, serving on the board of Metropolitan Family Services, the Bank Administration Institute, Chicago United and serves as a Trustee for DePaul University. Tim is active with The Bankers Club of Chicago.