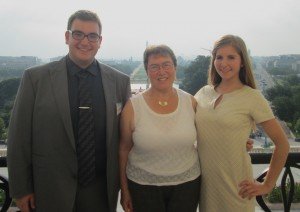 John Vitzileos, Edie Canter, and Pauline Esman on the Speaker’s Balcony at the Capital

Two Chicago Debate League students had the honor of meeting President Obama in the Oval Office on Monday, August 26. John Vitzileos (Whitney Young, Class of 2013) and Pauline Esman (Northside College Prep, Class of 2014) were among eight students from across the country invited to the White House as a result of their success as top speakers at the National Urban Debate Championships in April.

In addition to visiting with President Obama, the students had the opportunity to meet and engage in substantive conversation with:

The debaters engaged in dialogue with these leaders on issues such as U.S. economic relations with Latin America, border protection in a global era, high school graduation rates, careers in government, and the workings of the Supreme Court.

The meetings gave our debaters a unique window into the work of individuals who most see only on the news.  Students were struck by the officials’ generosity in giving their time to these meetings, their commitment to solving complex national problems, their candor in discussing challenges, and their interest in the students’ points of view.

According to Edie Canter, CDC Executive Director, who accompanied the students in D.C., “The meetings highlight both the significance our leaders place on effective educational programs such as debate and the power of debate to prepare urban students for complex dialogue on important policy issues.  It was an honor to accompany these young people – who will undoubtedly be the leaders of the future.”

Congratulations to John and Pauline on their great accomplishment and their fine work as representatives of more than 1300 CDL debaters. And many thanks to the National Association for Urban Debate Leagues for their generosity in organizing and sponsoring the trip.